Educators connecting online can transform your life. I’ve shared this many times as a connected educator evangelist. We can use our audience and followings to share students’ voices or support teachers who need mentors, ideas, and the benefits of a community. A lot of times, this is what I love about the educators I connect with and I hope you will continue to let online communities transform education, your teaching, and your learning.
My blog and tweets are often filled with inspiration and my excitement at cool tools, ideas, and the projects I put blood, sweat, and tears into. Today, I’m sharing a darker side of educator communities so we strive for much better, because our actions impact our trust, values, and norms in our teacher communities. Our acts become viral. Students see them. They are impacted by them. Our online choices and acts need to model what we hope from our students.
This post is long and filled with my disappointment in ed leaders I used to admire, who I met as the co-founder of #Edchat, and who I met in person at various conferences. I’ve already made many uncomfortable by standing up to unethical behavior, and now I will make them more uncomfortable by saying I expected more. However, before I continue mentioning the disappointment, I’d like to share my incredible gratitude and respect for those who spoke up with me to make sure a student received the follows and proper attribution for what he created. Thank you, Shawn White (@SWPax) and the 100’s of others for sharing the student’s work appropriately attributed.

We Should Strive to Give “Appropriate” Attribution

It is not ok to share work without attribution, copy another person’s shared resource and share as your own, to choose to act selfishly to promote yourself at the expense of others, or to try to silence those who hold educators accountable for their unethical behavior. My question to you, ed leaders, is, “Does the need to be viral justify sacrificing your character?” As Einstein says, “What is right is not always popular.”
Giving proper attribution is important. As Alec Couros, @Courosa, points out, “If we don’t give attribution, we lose the lineage and travel of ideas. That hurts everyone in a community.” As is the case with Krissy Venosdale, @Venspired, who shares in her post, Let’s Do Better Than This, how her inspirational poem she shared online was stolen by many and some are still profiting from shirts, posters, and TeachersPayTeachers’ lessons with her poem without her permission or as they claim as their own. Krissy is the creator of many inspirational posters and resources she often gives free to teachers with a Creative Commons License. Still, some teachers choose to steal licensed work made by other teachers.

On Twitter, when we share an infopic, chart, infographic, and creation from an author, we should: 1. Include the Twitter handle, 2. Link to the post with more info, and 3. Tag the photo with the author’s Twitter handle. We can go the extra mile by retweeting the original tweet. Twitter has 2 features to do this- Tag up to 10 ppl in an image without it taking away from your 140 characters and the ability to quote a tweet. If you are pressed for time or space, then at least share the Twitter handle that is included in the pic and if no credit is given, it isn’t okay to share this pic. Go the extra mile and Google Image reverse search to share the post with original author. Ask the Tweeter, who is the author.

Why I stood up and publicly called out a repeat offender

Where do these unethical choices begin? Why do some educators ok how they act online and cringe at this behavior in the physical world? This week I called out an education leader with 30000+ followers on Twitter. He is a repeat offender of benefitting from the words, shares, infographics, quotes, and thoughts of others without appropriate attribution. He has been called out by many educators for stealing, sharing in keynotes without proper credit, cutting off the watermarks in pictures, tweeting pictures and not giving any attribution, and choosing to copy tweets and repost as his own instead of retweeting or including via @TwitterIGotThisFrom. In case you still believe resharing his work doesn’t make you part of the problem, it does. You choose to make him go viral instead of the authors, creators, or teachers who put hours into manifesting these ideas. 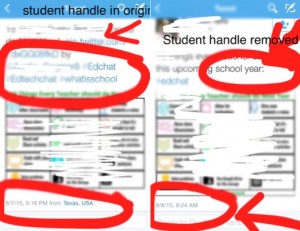 It’s now August and instead of making better choices to properly attribute, this educator’s need to go viral made him choose to do so at the expense of a student’s creation. I shared an infopic created by a student to inspire teachers. I discovered the student’s infopic when my friend told me about this awesome student he was going to interview. I looked at the student’s tweets, followed him, and shared the inspirational infopic with my 60,000+ followers and mindfully included the student’s Twitter handle with the hashtag #Edchat. The educator did not follow him at the time. I was saddened to see the next day this educator chose to copy my tweet, share with the #edchat hashtag, and removed the student’s handle that was in the original tweet. This educator had plenty more of his 140 characters to include the handle.
A group of us let the educator know we were disappointed he made the choice again to make another’s creation about him and this time that author was a student. The educator responded by asking how he was he supposed to know a student created it, which tells me he didn’t take the seconds to click on the Twitter handle. Still some educators were angry we were holding this educator accountable. Removing the Twitter handle means people won’t click to follow.

Those who stood up against this unethical behavior didn’t hurt our online community; the people who choose to act unethically hurt the community! Hold them accountable and stop trying to silence those calling them out to do better.

Why aren’t we holding these so called leaders accountable? They know better. This wasn’t an accident. This wasn’t a newby on educator communities making a mistake. This was an experienced connected ed leader with 30,000+ followers. Why is it ok for an educator to take the time to remove attribution for his own benefit? Is this what we want our students to believe is ok? It would have taken less time to click on the student’s Twitter handle and retweet the student than what he actually chose to do.

Why I am disappointed in some of my PLN’s response

Not a big deal is what other educators stated. Some educators excused the act, stating the “information is disseminated,” and the original author doesn’t matter. These are what principals, directors of teachers, and teacher trainers shared publicly. Some of my friends reported Voxer group complaints of us taking a stand. Holding this ed leader accountable was considered “drama.” It bothered some ed leaders so much, one publicly posted a picture to mock the incident then tagged other leaders to join in that conversation. When I responded to the thread and tried to explain why attribution and this incident with the student wasn’t a joke and why it is important, they didn’t respond back. The support for unethical leadership and lack of proper attribution is a big problem. A more dangerous problem, is the need to want to silence those who hold our leadership accountable, because it makes people uncomfortable.

Positive Outcomes of Speaking Up

On a more positive note, many teachers learned about appropriate ways to attribute on Twitter. The idea is to include the Twitter handle of the infopic’s author or at least tag the author on the pic. Check out Cori Corburn’s (@CorburnCori) video below! When you see someone who shares an info pic without any credit or who left out the Twitter handle, then reshare and tag that creator so people follow the author and learn from the author’s other ideas. If you notice someone shared info without attribution at all, then don’t share that post. Instead, reshare the author’s post or create your own post properly attributing.

I end with the Challenge from @Venspired, “Let us do better.” 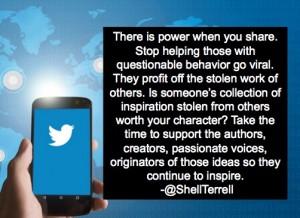 There is power when you share. Stop helping those with questionable behavior go viral. They profit off the stolen work of others. Recently, one of these “rock star educators” has influenced Principals and teachers to mock those he has selfishly stolen credit from for a year or who are trying to end his unethical behavior. Is someone’s collection of inspiration stolen from others worth your character? Take the time to support the authors, creators, passionate voices, originators of those ideas so they continue to inspire.